Home » What is CBG and what is it good for? (with actual data and research)

What is CBG and what is it good for? (with actual data and research) 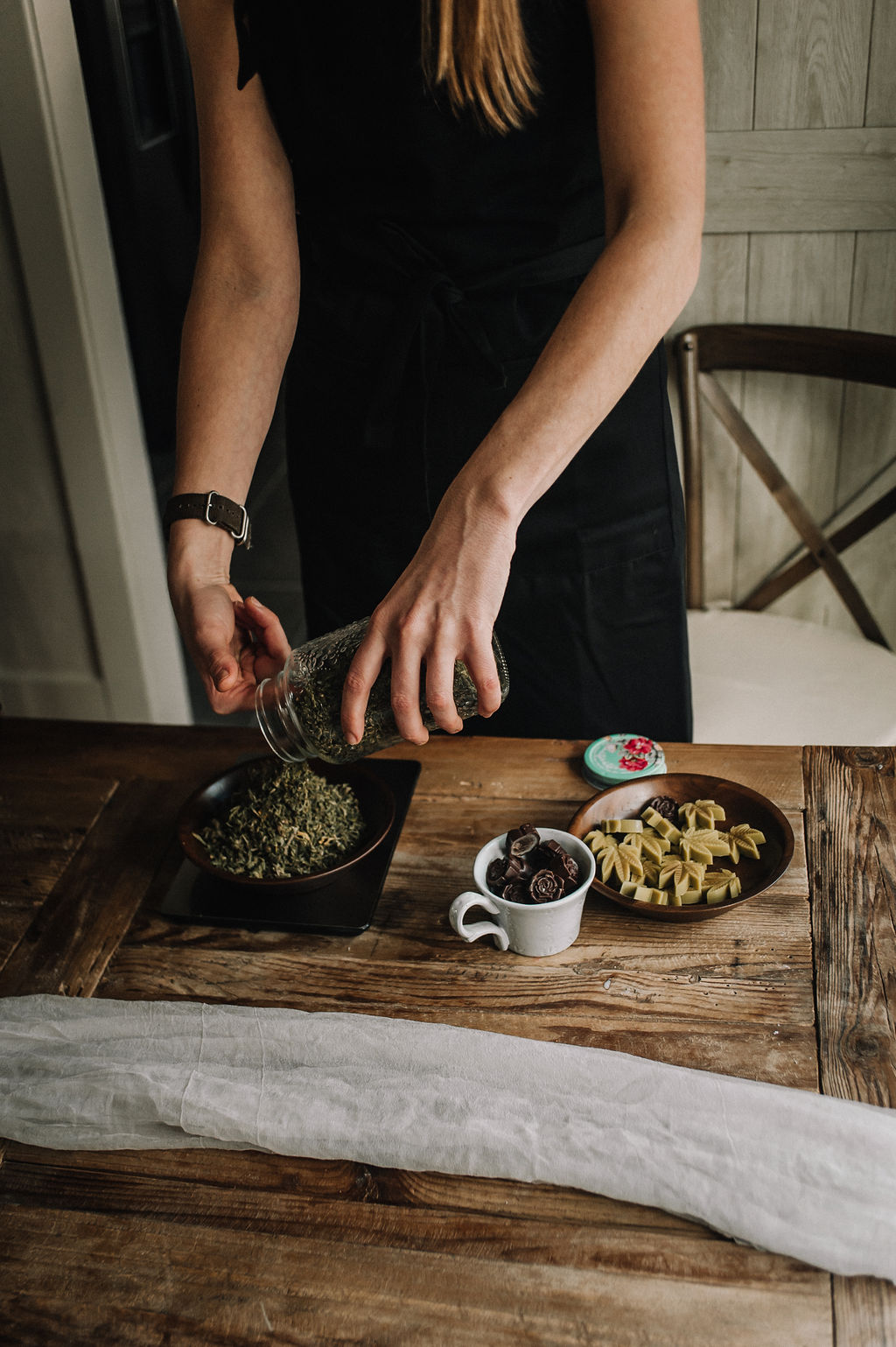 We have a very simple mission here at Wake + Bake:

We're here to show the world that cannabis is healthy and to share healthy cannabis recipes.

But when I tell people this, the message often gets lost because of what some people think cannabis is.

“I've tried using it but I don't like how it feels.”

“I used to use it when I was younger but it made me so foggy and tired. I quit years ago because I was a burnout.”

“I don't want to get too high to function.”

I've heard so many responses like this over the years, that I just quickly back up and remind people that cannabis is a plant that contains TONS of compounds that won't blast you off too the moon or glue you to the couch.

“There's so much more to this plant than THC,” I usually reply.

When CBD became popular and more widely available a couple of years ago, this conversation got a lot easier.

But it quickly became a bit more complicated as soon as advances in breeding brought a whole new cannabinoid into our worlds.

As soon as I started saying things like “CBD and CBG won't get you high but have their own uses and benefits,” I started getting that confused look again.

CBG is short for cannabigerol and you don't need to know how to pronounce that word correctly in order to understand this amazing compound.

CBG – sometimes considered a “minor cannabinoid” – used to be called “Rolls Royce of Cannabinoids” because it was difficult to find and very expensive.

But last year, a friend gifted me my first 1/2 lb of 12% CBG plant material for my birthday in October.

Since then, I've been able to order it online from Sacred Smoke just like CBD to make my own infusions and edibles.

I'm starting to see CBG everywhere and when I talk about it people have so many questions and stories to share.

Some readers and students have mentioned that CBG did for them what they hoped CBD or THC would in terms of mood enhancement, pain relief and anxiety reduction.

Incorporating CBG into my oils and edibles has been so helpful for me personally, that I couldn't wait to share it with you, but I'm not just going to talk about how great I think it is or share the building mountain of anecdotal evidence in this post.

We had to go straight to the source and dive into the research that exists so we can gain a better understanding of it.

In this post, I'm going to break down everything we know about CBG that is practical that can help guide us, and nothing else.

Get ready to geek. out. 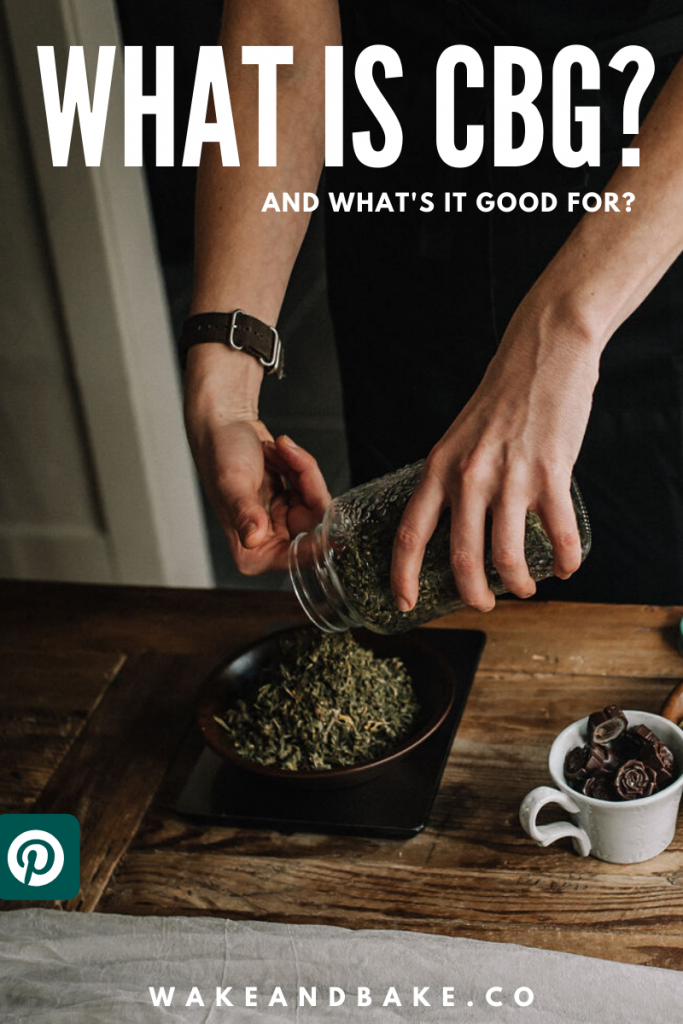 Benefits of CBG: What is CBG good for?

Like CBD, when I see lists touting the benefits of CBG without any resources, my bullshit meter goes off the charts.

But don't let that scare you away from this compound.

Like CBD, CBG has been shown to be beneficial for a lot of different, and seemingly unrelated issues because of the way it interacts with the endocannabinoid system.

Here are things that we found promising research on when it comes to CBG.

CBG for Brain Health and Depression

Like other cannabinoids, in some small animal studies, CBG has shown some promise for promoting or protecting brain health.

In one study, CBG was shown to protect brain cells against damage, degeneration or impairment when used on mice with Huntington’s disease giving a shred of evidence that it could be a possible treatment for people with Huntington’s in the future.

Research has also shown that combining CBG and CBD decreased inflammation in the brain, which may make it potentially make it effective for things like ALS.

At any rate, even people without ALS or Huntington's disease could potentially benefit from a little brain boosting supplement like CBG.

CBG has also been shown to be a more effective GABA uptake inhibitor than THC or CBD.

Low levels of GABA can contribute to anxiety and mood disorders.

While it's unknown how much of an impact CBG has directly on GABA, it could be why many people attribute CBG to improved moods.

While all we currently have on CBG and depression is anecdotal, myself and many others have noted that regular doses of CBG seem to have a positive impact on mood and outlook.

Take that “this is your brain on drugs” commercial.

The connection between CBG and pain relief just got a brief mention in this article.

Like all the things on this list, we need more research to know if there's a link between CBG and pain reduction for sure, but we had to dig a little deeper to see why CBG may be better for pain than THC.

As we discuss below and above, CBG's anti-inflammitory response may be a big factor in pain reduction since inflammation is a contributing factor to pain, even in hard to treat neuropathic pain.

While the jury and the research is still out, CBG used alongside other treatments and cannabinoids may eventually prove to be an effective pain reliever for aches and hard to treat chronic pain.

Inflammation doesn't just impact the brain or the neuromuscular system. It also can have a huge impact on the digestive system.

Evidence from a small study on mice showed reduced inflammation in those with inflammatory bowel disease, which impacts millions of people worldwide and currently has no cure.

Other cannabinoids have been shown to improve the ratio of good to harmful gut bacteria, reduce gut impermeability and could potentially contribute to weight loss.

The big C. This is always such a sensitive topic when you're talking about cannabis.

If you're trying to figure out how to navigate cannabis and cancer, and you've landed on this post, I highly recommend working with a cannabis coach alongside your medical team or finding a doctor who is well versed in cannabis.

Dr. Bonnie Goldstien has mentioned in the past that she's seen the best results when people use both doctor recommended conventional cancer treatments and cannabis use together as opposed to using just one or the other.

From that perspective, and because drug interactions are a very real thing when it comes to CBD and CBG taken orally, it's very important to communicate your cannabis use to your doctor when tackling any major health issue.

That being said, I'm not a doctor and what I learned about CBG and cancer was pretty exciting from an educator's perspective.

A study on rats with colon cancer provided evidence that CBG can be used to help reduce the growth of cancer cells and tumors.

This may be because CBG has been shown to inhibit a little thing called the TRPM8 channel, which is part of the nervous system.

When this channel gets overly sensitive (or “upregulated” in science terms) it has been linked to the growth of many different types of cancers.

By inhibiting the TRPM8 channel CBG shows potential for stopping the progression of tumor growth, but… and say it with me now… we need more research.

It's one thing to pee a little when you laugh at one of the super well written jokes and ancient puns you'll find here on Wake + Bake. It's another thing to suffer from chronic bladder issues.

CBG shows the most potential among the cannabinoids to treat bladder dysfunctions.

This may partially have something to do with how it impacts that TRPM8 channel.

When over-expressed, the TRPM8 can lead to many issues surrounding these pathways, one of which is notably bladder dysfunction.

Since CBG can inhibit TRPM8, reducing the excess sensory impulses, it shows some promise as a potential treatment for bladder dysfunction.

It also may be of interest for bladder issues because of that CBG-GABA increase, which – aside from making you feel better – can also contribute to a reduction in stress related muscle spasms.

If you're trying to avoid the munchies, CBG may not be for you.

However, it can be a tremendous help to those who are finding themselves without an appetite for various reasons ranging from chemotherapy to depression.

From the very limited mice study, it seems like you'd have to take much higher doses of CBG in order to increase appetite.

I've found this to be true for me as well. Unless I take a lot of CBG, I don't notice an increase in appetite, unless I'm also taking a lot of THC which is it's own appetite monster.

Dosing CBG: How much CBG to take?

Like all things cannabis, figuring out a dosage that works for you is a personal journey that should be guided by a doctor, especially if you're taking medications or have any health issues.

With that being said, we didn't find any good sources for dosing CBG on the internet at the time of publishing this post, so it's back to the olden days of cannabis guinea pigging.

All of the current sources we could find were trying to sell CBG products and we unfortunately couldn't find any really solid data that we could pull from.

I personally have found that taking two 10mg doses of CBG per day works for me, and I balance that with 10mg of CBD and about 3-4mg of THC in each dose. That's my personal happy place.

If you want to incorporate CBG into your world, the guidance is the same as other cannabinoids.

If you decide to use CBG, remember, every human body is different and we still know very little about this cannabinoid, especially when it comes to drug interactions. Never start taking anything or make changes to your health care routine without consulting a physician first, preferably one who has experience in cannabis.

Does CBG have side effects?

CBG has not shown notable side effects in rats and mice. Unfortunately, we don't have sufficient data to say whether or not CBG causes a certain subset of side effects in Humans.

But because CBG and CBD can interact with certain drugs, it can increase the side effects of other pharmaceuticals.

Where to buy CBG

With all of the “I don't know”s and “talk to your doctor”s in this post aside, I love using CBG.

I like using as many cannabinoids as I can and CBG has helped me and my fellow guinea pigs feel better than using CBD or THC alone.

I smoke it, vape it or use it orally just about every day. I've also experimented with it as a topical.

If you're an experimental critter like me, you're probably like “STFU lady… and let me try it for myself.”

Like you, I'm pretty uptight about sourcing plant material.

Because I've personally seen so much crap sprayed on this medicine and have seen it grown in ways that are detrimental to the planet, I only use things that are:

This is currently the only place I buy my CBD and CBG plant material for DIY infusions and tinctures because it meets all of those requirements.

If you're looking for an affordable premade CBD:CBG oil so you don't have to fuss with a recipe, I love this one.

Has CBG helped you?

While the research is still light, the recent availability of high CBG strains has created more anecdotal evidence.

Even though this isn't scientific, we can learn so much from each others' experiences and approaches to cannabis.

Please share your experience with CBG in the comments below so we can all keep learning.

And remember, this is a community effort. If you do find a good resource or research that can help us better understand CBG, please comment below or share it to [email protected]

39 thoughts on “What is CBG and what is it good for? (with actual data and research)”