Home » How to Make a Pumpkin Bong

How to Make a Pumpkin Bong 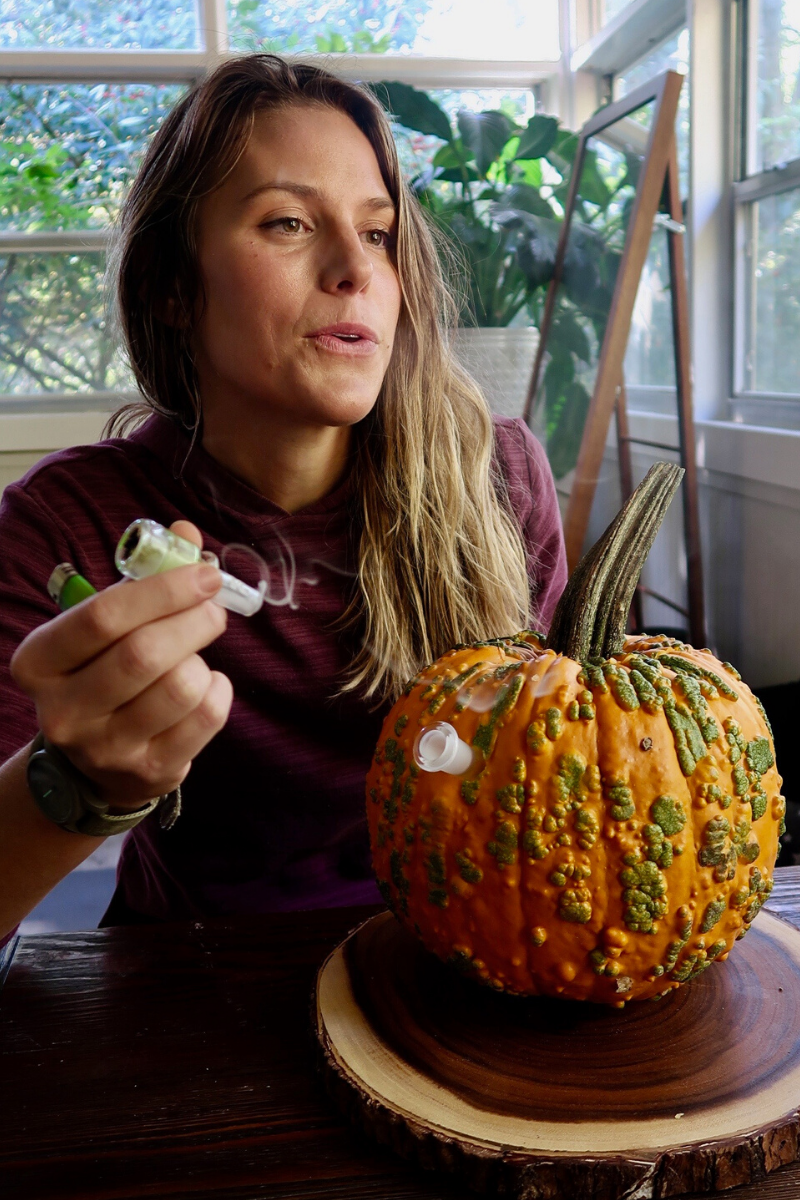 The first time I saw a pumpkin bong I thought, “What a ridiculous stunt… this is obviously clickbait.”

And then I clicked on it.

What started out as mocking quickly turned into a quest.

Your mission, if you choose to accept it: looking for the perfect pumpkin to turn into a bong.

As soon as fall hit this year, it was on.

It had been a rugged couple of weeks/months/the entire year sucked, and I was in the mood to say “fuck it” and make something ridiculous.

So instead of being an adult, I dedicated a week to cannabis infused rice crispy treats and this beauty. 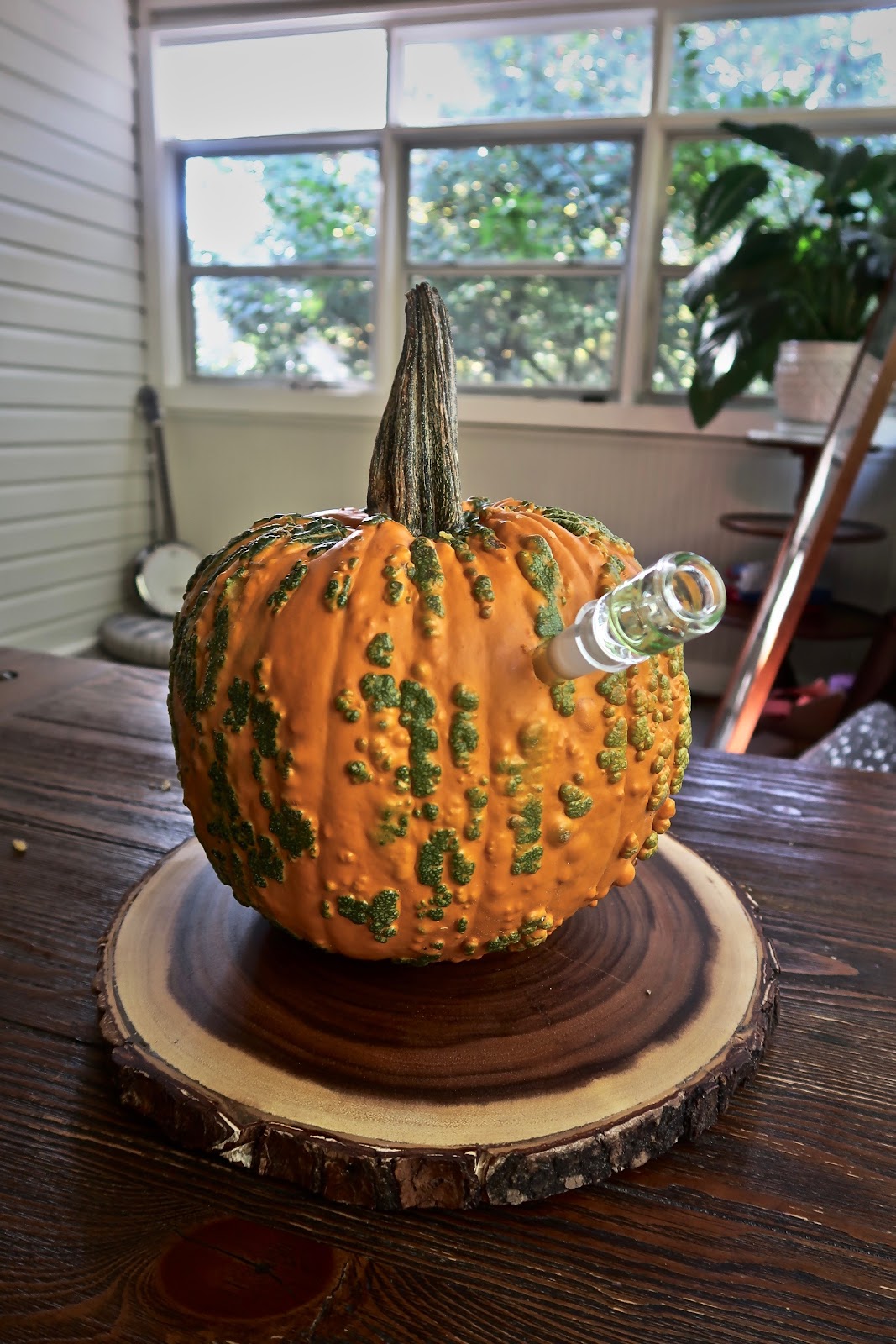 Making a pumpkin bong was so much easier than I thought it would be.

I procrastinated on it because it seemed like such an undertaking. 5 different rice crispy treat recipes later, I still kept looking at the pumpkin with that glare of procrastination.

But one day I was in a rush so I could run away to Colorado during harvest. I looked at the pumpkin that was sure to rot by the time I got back and couldn’t procrastinate any longer.

So I made this biodegradable, compostable, holiday-themed bong in less than 7 minutes flat. 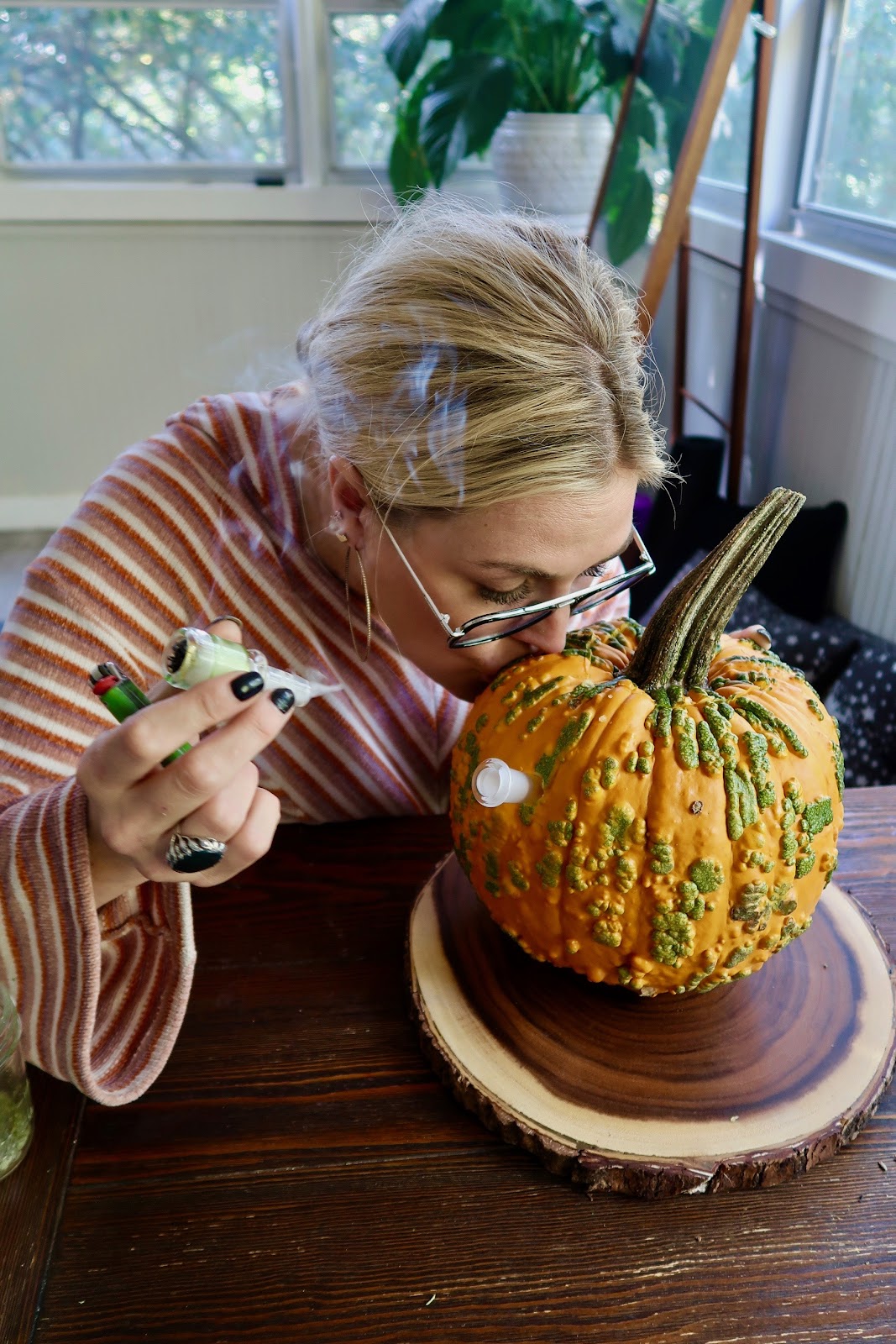 It was the perfect “fuck it” fall project and the high CBG plant material I packed in the bowl was non-intoxicating and gave me an uplifting head shift. I love the pumpkin bong almost as much as I love CBG… but we’ll get to that later.

Right now, check out how easy it is to make one of these.

Here’s what I learned making a pumpkin bong: 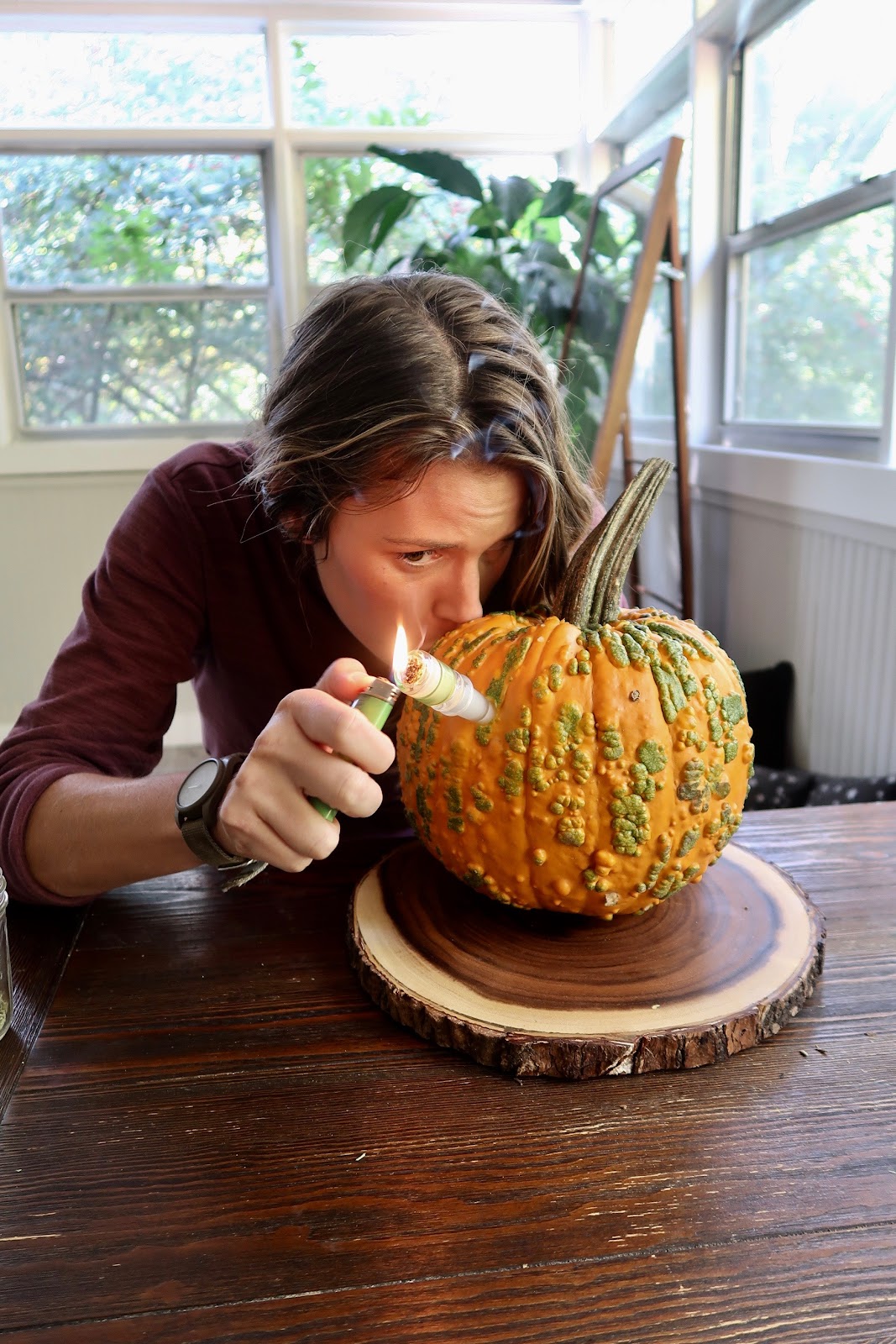 How to make a pumpkin bong

Step 1. Get a bong slide and a bowl that fits inside of it. If you don’t already have one, you can get one here.

Step 2. Find a pumpkin. There are lots of cool varieties available everywhere these days, so I’d say find something beautiful instead of going for the same ole Charlie Brown pumpkin.

Step 3. Cut around the stem and pull it out. Cut off any seeds and goop.

Step 4. Scrape out the “guts”. And while you’re doing that, remember when you played that game in middle school where you wore a blindfold and stuck your hands in things that felt gross. Peeled grapes really do feel like eyeballs.

Step 5. Drill or cut a hole that’s just big enough to fit your bong stem. It needs to be tight, so go slow on this part. Fit the bong stem into the pumpkin.

Step 6.  Drill or cut an intake hole that’s far enough away from the bowl that you won’t light your hair on fire while you’re inhaling. If you’re wondering why I keep driving this one home, you can ask my new bangs.

Step 7. Pack the bowl with your favorite plant material and smoke it like you would any bong. Pass it around. This thing is meant for sharing.

Step 8. After you’re done, toss your pumpkin into the compost pile (or chuck it at something) and save the slide and bowl for next year’s pumpkin bong (or put it back in your regular bong). 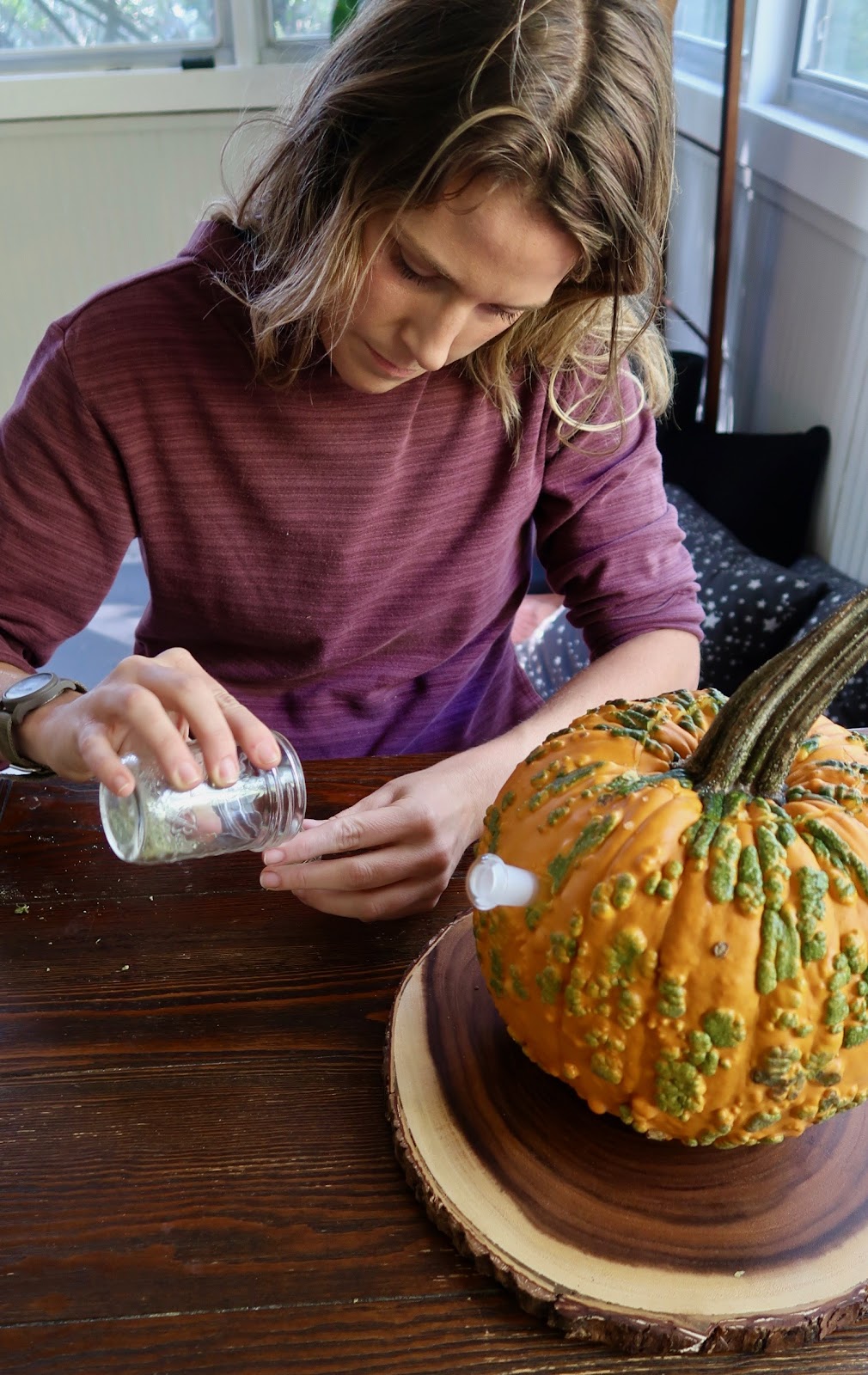 Taaadaaa! If you decide to make one, please show us your pumpkin bong in the Wake and Bake Facebook group!

I can’t wait to see what you create!

1 thought on “How to Make a Pumpkin Bong”