Home » The Firefly 2 Review: The Best Portable Vaporizer in 2017

The Firefly 2 Review: The Best Portable Vaporizer in 2017 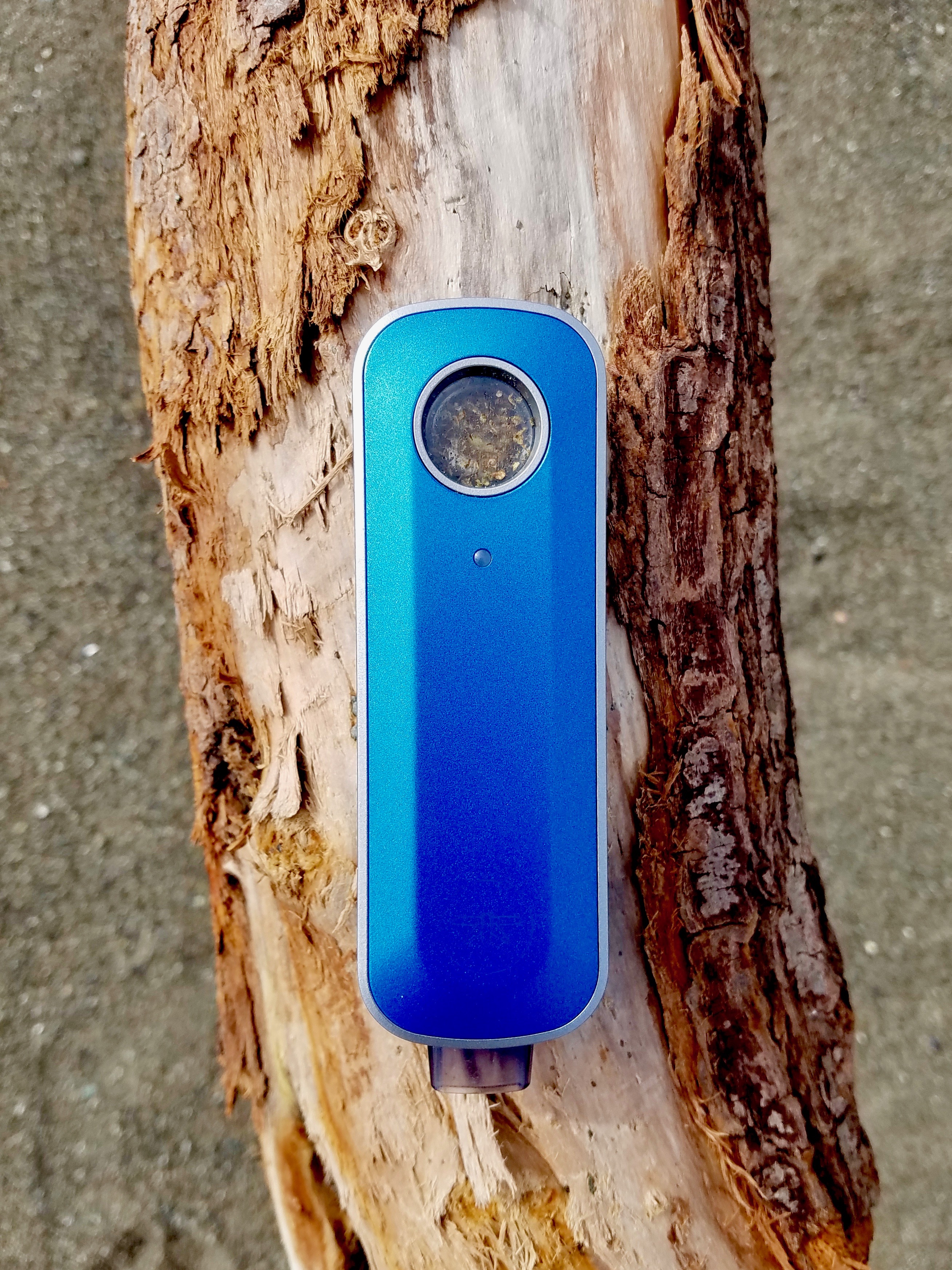 “I thought vaping was whatever. Every time I hit it (the Firefly), I eat my words.” – A Tester

The first time I ate an edible, my life changed forever. I was fortunate enough to have a delightful, pain relieving, fun and mellow experience that I wanted to replicate again and again. Soon after, I started making cannabis infused coconut oil and putting it in every food I could think of, which led my first cookbook. I really fell in love with the way edibles forced me into a deep state of relaxation and awareness and helped me slow down enough to have a reality check.

But over time, I started having issues with fat based edibles. They were hard for me to dose. They took a long time to take effect. They left me groggy if I took too much. And while I still love infused oils for nighttime, topicals, suppositories and some deep therapeutic uses, I really needed to find a better way to use cannabis on a regular basis.

I’ve tried lots of things over the years like tinctures, topicals, bong rips, and even other vaporizers, but it wasn’t until I tried the Firefly II that I realized that vaping was perfect for my daily microdosing needs.

In this post we’ll go over the pros and cons of the Firefly II and I’ll tell you how it helped me quit smoking and decrease the munchies and effectively treat chronic pain issues while conserving cannabis and looking superfly (which is obviously really important for a person who uses words like superfly). 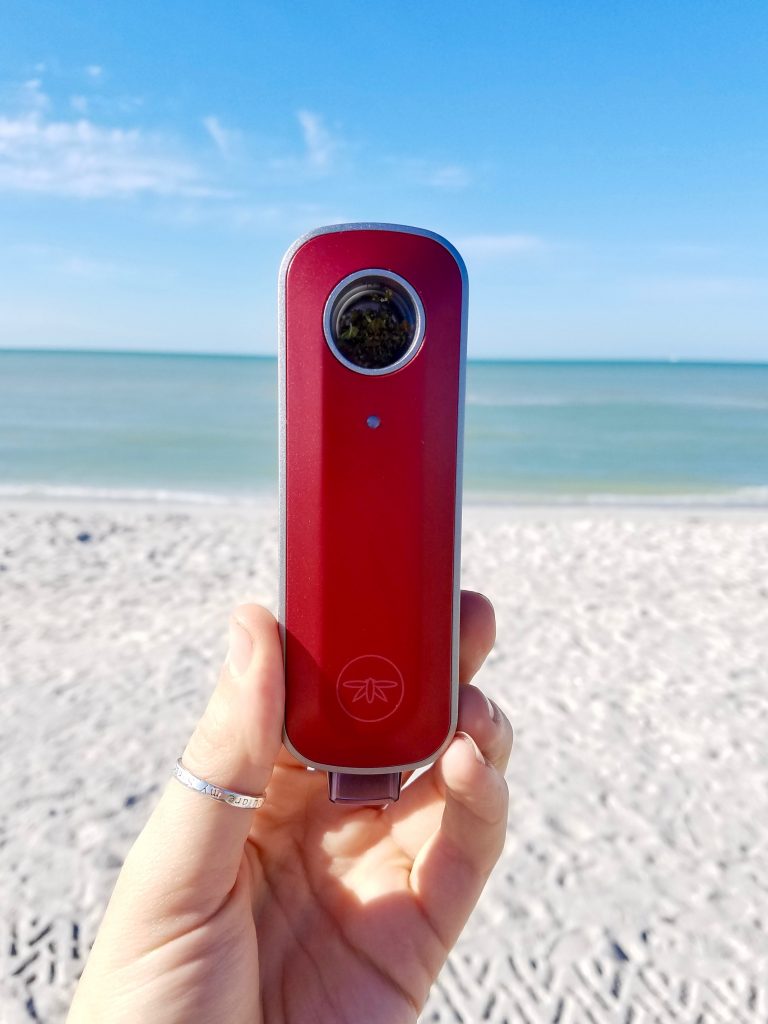 I’m going to start out with one of my favorite things about the Firefly II. It’s what they call the “whole plant experience”. The more you learn about cannabis, the more you realize that it’s a much bigger picture than THC.

There are over 100 known cannabinoids and terpenes in the cannabis plant and many of them play a vital role in the effects you feel when you ingest cannabis. They also do some more subtle work like reducing inflammation and repairing cells (CBD even helps your brain cells grow).

It’s important to understand that when you light cannabis on fire with a trusty Bic, you’re annihilating many of those compounds. But smoking isn’t the only culprit. High temperature cannabis infusions (and baked goods) can be less effective. Even other vaporizers waste cannabinoids and terpenes due to the way they heat the cannabis using conduction heating. 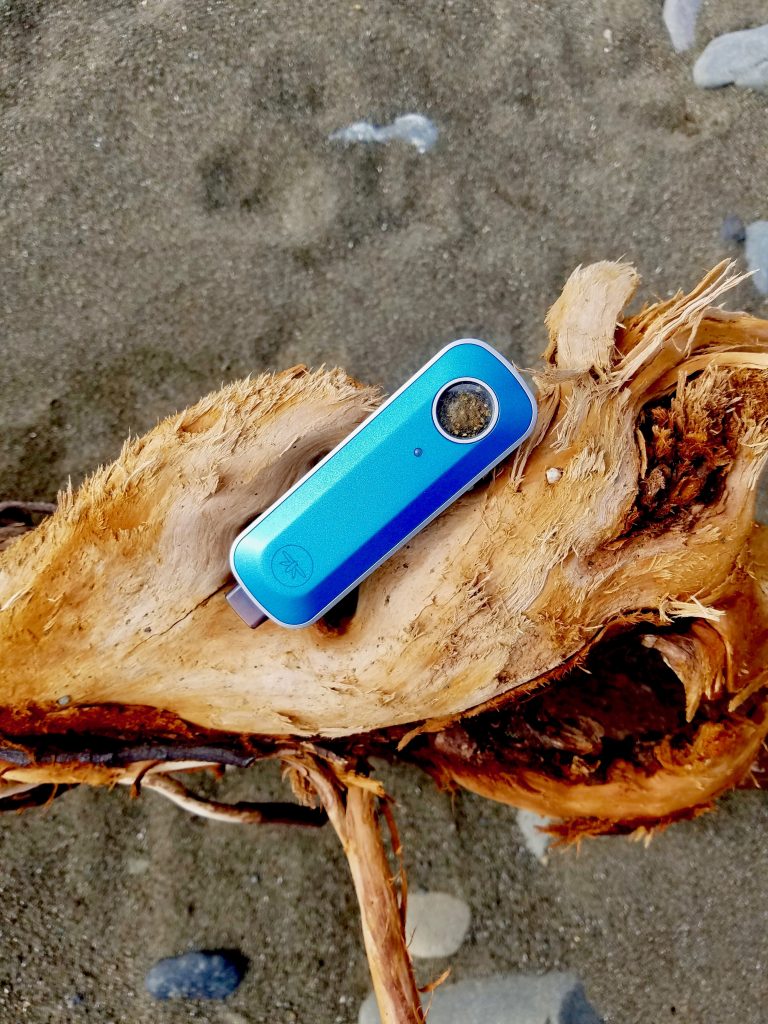 The Firefly uses convection heating, which allows you to get the most out of your cannabis. COO Baran Dilaver explains how it works:

“With Firefly, you are able to capture every terpene and cannabinoid the moment they are released. Since you are able to go from room temperature to 400º F (or the alternate settings) in one single breath, you are going through the entire spectrum of various vaporization temperatures of different terpenes in that single breath, thus getting the ‘whole plant experience'. When you put the Firefly down, the cooking process stops, whereas with other vapor devices the plant continues to cook through the conduction of heat. This is an important difference as most patients don't always want to go through an entire bowl.”

In my experience, cannabis vaped in the vaporizer has a very balanced feeling. I don’t get that punch! bang! pow! that I get when I used to smoke cannabis, and I don’t get heavy-handed, mind-numbed, munchies are a’ comin’ kind of feeling that is common with potent edibles.

And on that note… I can’t wait another second before I mention this. The Firefly has become one of my favorite anti-munchies tools.

I don’t know why it works and I’m sure there’s not science to back this up yet, but when I microdose with the Firefly, I never get the munchies. 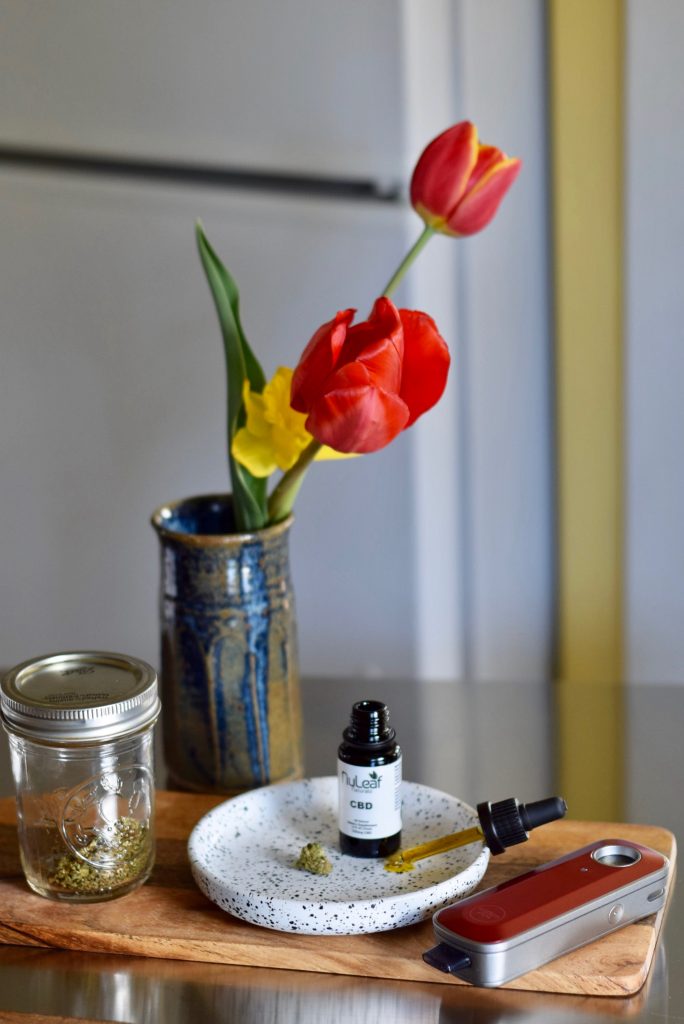 I get hungry… yes. I like the taste of food more… totally. But after using this device for almost 6 months with several strains, it has never led me to the grocery store or the cupboard with ill intentions. And I’ve never come out of a munchies fog feeling gross and tired.

I really love that the Firefly has some of the benefits of smoking cannabis (comes on quickly, easy to dose) but has never given me the munchies the way smoking even a few puffs of cannabis does. 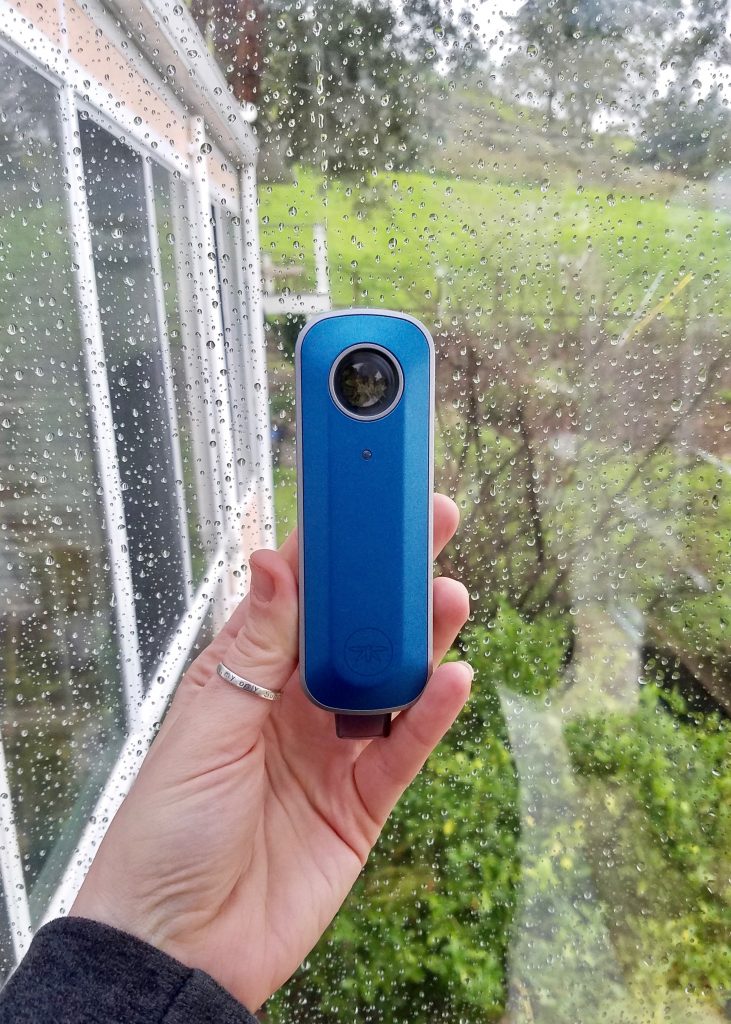 As usual, I wanted to offer up my favorite way of making a decision.

It’s got pros. It’s got cons. It’s the tried and true PROS and CONS list. 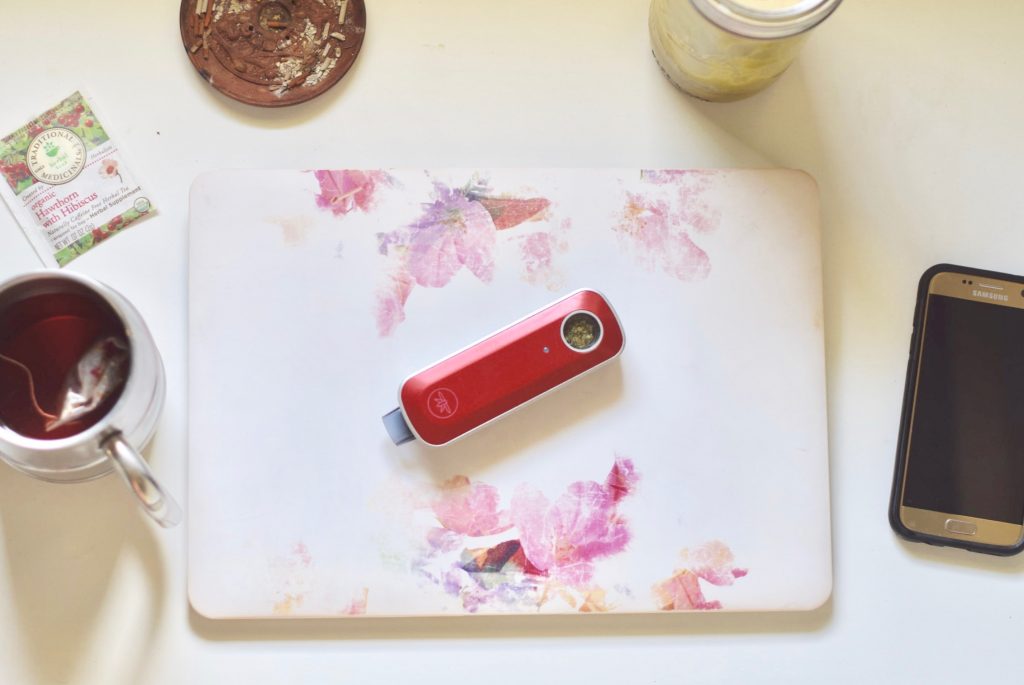 We got our firefly when the farmer and I were traveling in California. We were so excited because we only had one nug and a week left of our trip. We started out with two nugs and one was gone in less than two days. The second bud vaped in the Firefly was with us almost until the end of the trip. I was astounded at how well it conserved cannabis.

Then when we got home, I wanted to experiment with making ABV Oil and started saving the leftover material from the Firefly. ABV stands for Already Been Vaped and you can use your “spent” bud from the Firefly to make infused oil. The only “problem” was that it took months to save up enough bud to make a batch. The oil turned out great and was about 30mg/teaspoon even after all of the material had been vaped… already.

I couldn’t believe that the cannabis was still useable, let alone that it yielded a potent oil. If I would have smoked all of that, I would have burned right through it and all that would have been left was ashes in the wind. 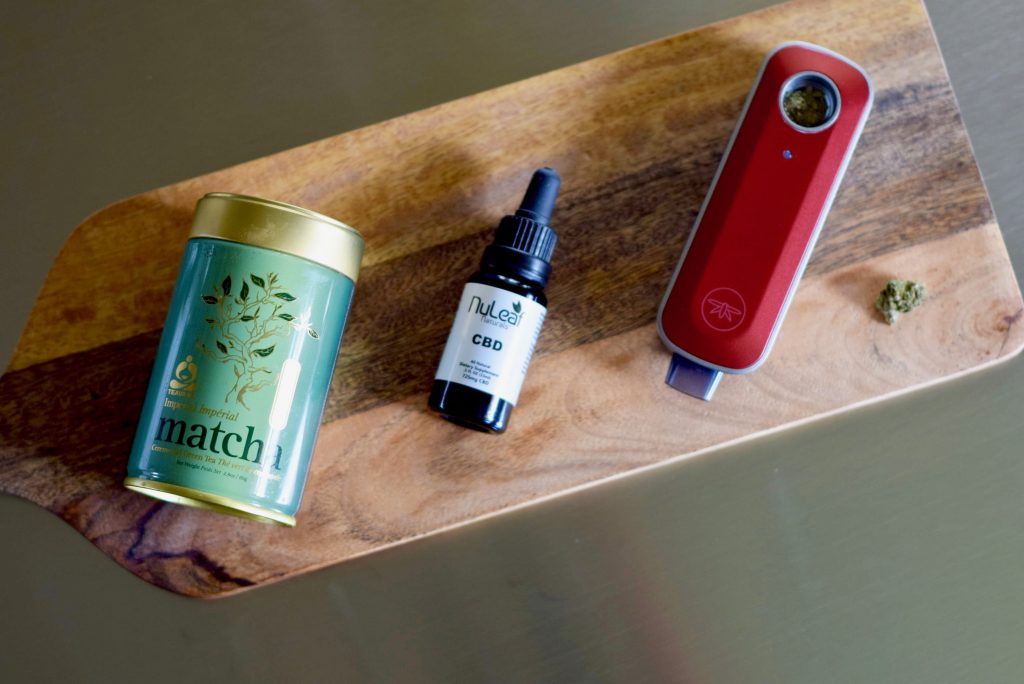 I leant this out to a friend of mine so she could take it for a spin and here’s what she had to say about the taste of cannabis when using the Firefly II:

Yeah… it is that good. I switched back to smoking when I was on a trip and forgot my charger and the flavor of combusted cannabis is Ghuh-Rossss in comparison. 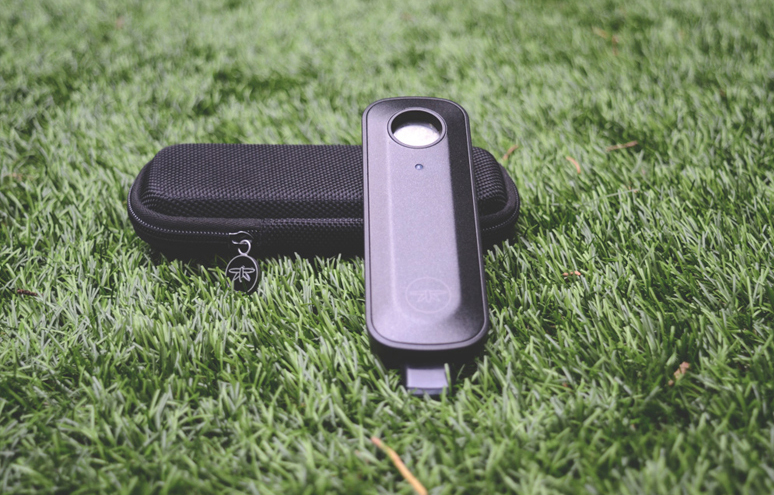 The Firefly is small, noiseless and doesn’t leave the smell of cannabis smoke all over your clothes and house.

One of the best things about the Firefly is how great it is for on the go medicating. Since it’s small and doesn’t require any extra attachments, you can easily throw it in your purse or your man pocket when you’re headed out the door (ladies… I think we all need to start talking about the injustice and inequality of our useless tiny pockets… ammirite?).

If you’re going to be taking it with you often, I highly recommend the carrying case which protects it when you’re on the go.

And lucky you… the case is free when you order your Firefly 2 until the end of summer! 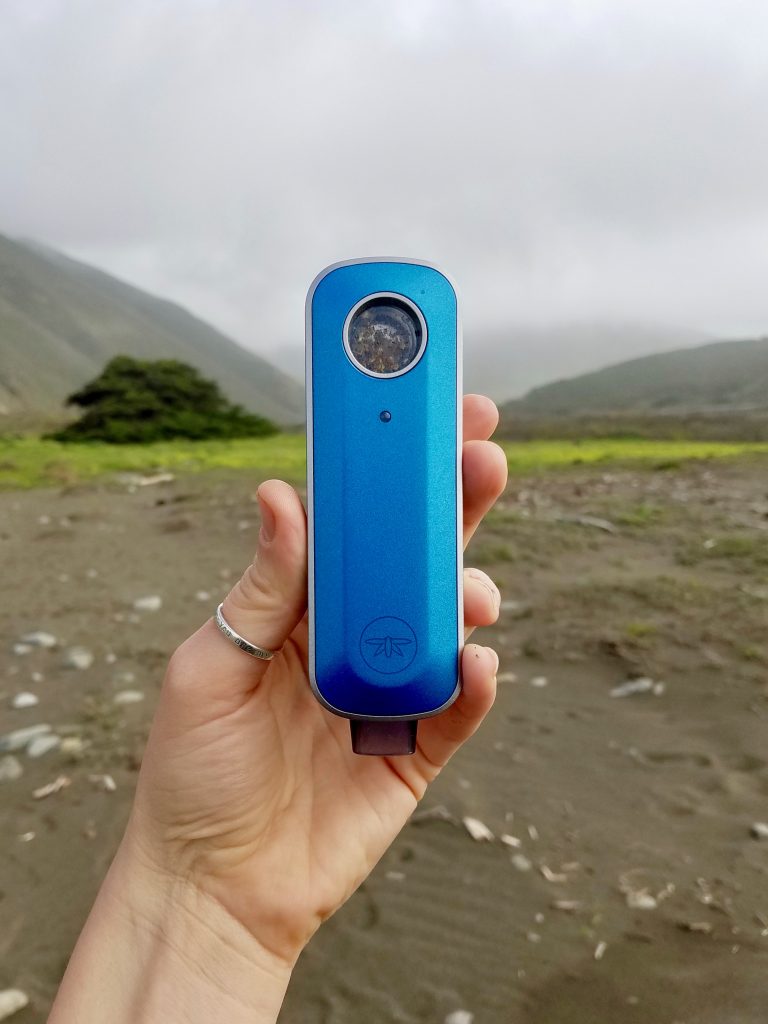 Not only do you get a full plant experience, you also get a more well rounded experience and most users need less cannabis. The other side of this is that unlike with smoking or edibles, it is very very hard to accidentally take too much.  “I literally couldn’t overdo it. I tried.” – Jen I had the same experience when I was trying to overdose for a section of Dazed + Infused. It took a long time to start feeling paranoid or anxious. This sucked for the experiment, but for day to day microdosing, it’s the best. 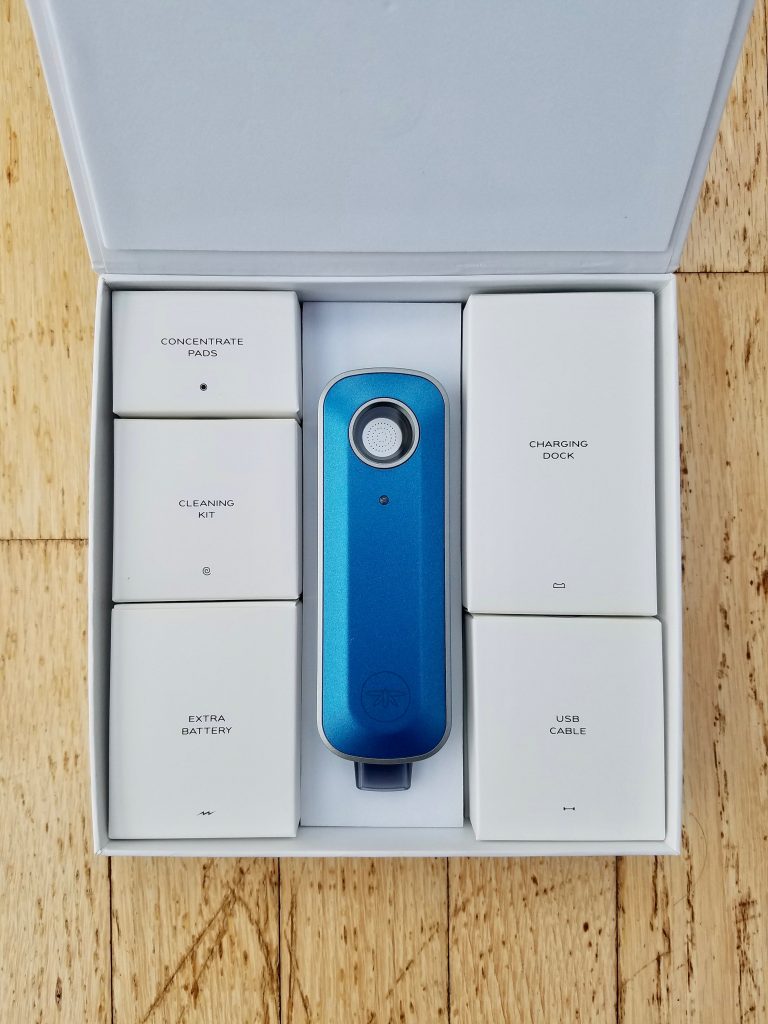 Everything about the Firefly feels futuristic. When you open the box, you’re propelled into the living room of The Jetson’s stoner neighbor. It’s beautiful. It’s sleek. It’s sexy.

You can swap out the magnetic covers (they have these gorgeous wood ones now) and you can swap out the battery cover if it gets scratched up. I think this is amazing for those of us who are cosmetically hard on our gear, but don’t want to have to invest in a completely new device every time it gets scuffed up. 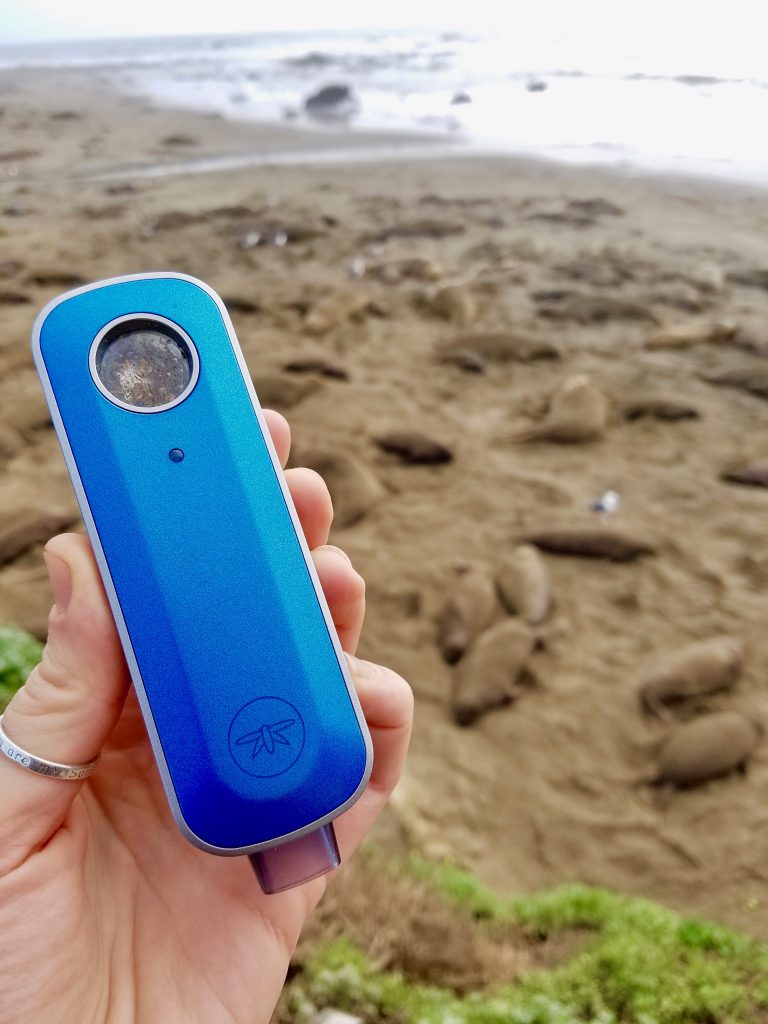 The Firefly and the Elephant Seals: The perfect appetite suppressing combo

Again… that whole reduction in munchies thing is a thumbs up emoji. While I can’t guarantee that it will have the same effect on everyone, it has had a profound reduction on my personal experience of the munchies phenomenon. 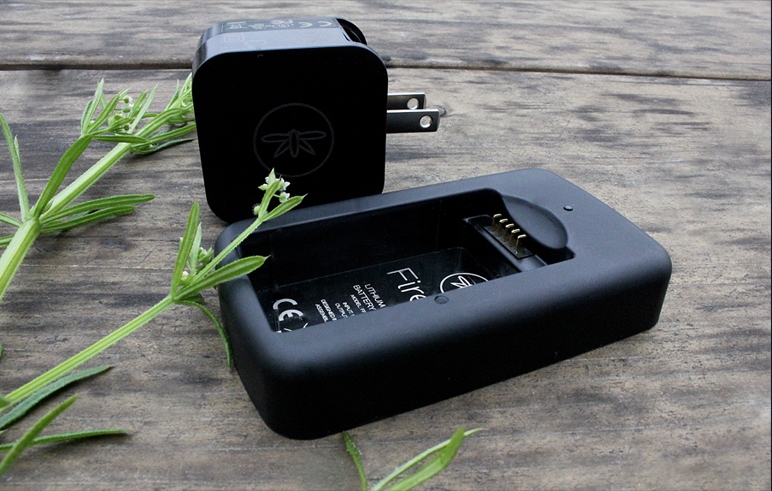 This is something to be aware of and there is a great solution that makes it a non-issue for me now, but I want to make sure you all know about it and how to deal with it.

All of my testers noted the battery as the only thing that they didn’t like about the Firefly II. It’s not that the battery doesn’t last long. That’s fine. The issue is that unless you check your Firefly app, your battery can run out without you even knowing it was low. You’ll be getting ready to take a nice little puff and you’ll get the blinking red light telling you that’s a no go.

The charger that comes with the Firefly is a nice little dock and you just place the device onto it and it charges the battery inside the device. I know that this is going to sound like such a white girl in Colorado problem, but in order to charge your extra battery, you have to take one out and put the other one, close the back of the device and put it on the charger… and that means you either have to do this ahead of time and be prepared, or you can’t vape until you charge your battery.

Seriously… I can’t even believe I’m writing about that as an issue. But it was apparently annoying enough that I heard it from 2 of my testers. So I called up the folks at Firefly and asked them what the deal was and if there was a fix.

Turned out… there is! Firefly created an external charger that charges your extra battery outside of the device so you can just swap it out and keep vaping anytime your battery runs out. It reminds me of my external battery charger for my camera. I can keep using the camera while my backup battery charges in the wall and I can swap them out at any time without having to stop shooting. It’s the same idea, but with vaping!

I LOVE my Firefly. If the Firefly was a cult, I would drink the cool-aid. It's my favorite way to use cannabis and I wouldn't want to live without it ever again. I'm grateful that there was an easy upgrade to solve the battery annoyance, but even without it, I loved my Firefly. I used it for months without the upgrade and I still thought it was incredible.

I would buy a new one if it breaks, snag a Firefly 3 if they come out with one of those, and will mourn it for months when the apocalypse hits. Since it conserves cannabis so well, I would also recommend it to a cranky relative on a fixed income (the true test if something is worth the cost).

If that all sounds a bit exaggerated, you can ask anyone who has talked to me in the past 6 months and they'll tell you that I won't shut up about how amazing this thing is. Maybe it's why I don't get invited to dinner parties anymore.

You can find more info about the Firefly here.

Do you have a Firefly or questions about it? I’d love to hear your thoughts in the comments section below!

15 thoughts on “The Firefly 2 Review: The Best Portable Vaporizer in 2017”